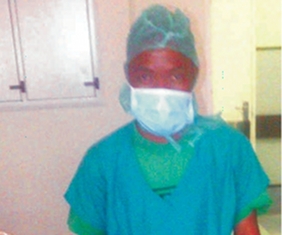 Scrubbed and ready to go!
“Before this week I thought Pharmacy was about farming”! Like Mzimasi (a local pupil), many learners around Zithulele are confused about what different careers entail and are not aware of the possible avenues to pursue after leaving school. Much of this is due to a lack of local role models, often because those who have the opportunity to further their studies then pursue work in urban areas, not returning to the villages where they went to school. Also, as Axium Education has learnt from the pupils they are teaching, learners receive very little guidance at their schools regarding career choice and university applications. When asked what they would like to study after school, learners had very little idea of what careers were 'out there' and what they entail.

With this in mind, and building on the success of last year's inspiring talk to learners by Thembinkosi, Zithulele's first “home grown” doctor (read more about his inspiring story at http://mg.co.za/article/2012-01-06-a- doctor-born-of-hope/), Axium arranged for Grade 12 learners to shadow members of the clinical team at the hospital. With staff on board, 16 excited learners rotated around the hospital to get a taste of each discipline. They grilled their mentors with questions and gained invaluable knowledge. Some were able to assist their mentors and practise the work for themselves, with one of the boys lucky enough to watch a cesarean being performed! As Mzimasi said by the end of the week "it was so nice to meet the doctors and get information on how to become a doctor. I got information on the realities and responsibilities of each person. It was so interesting and wonderful”. His thoughts were echoed by Elliot, who commented that "we have seen so many interesting jobs. This week has encouraged us to work hard at our Maths, Science and English”.

To expose learners to a wider variety of options, Jabulani is in the process of organising a careers fair where partners from the education authorities will engage learners and guide them towards possible future careers.