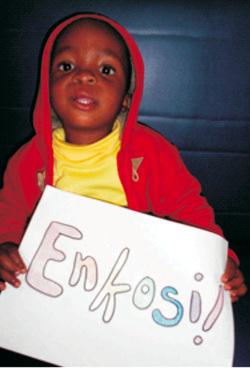 Big thanks from Pumlani!
On the 3rd of May 2012, Pumlani and his mother travelled back to Johannesburg for the second operation to repair the cleft in his palate. Considerably more involved than the first, this surgery was to reconstruct the roof of the mouth.

Although sore after his operation, Pumlani was discharged after just one night in the hospital. Thanks to the extraordinary generosity of Desiree Allen (who offered us her home and hospitality), Pumlani recovered in a comfortable environment, and was soon showing signs of returning to his precocious self.

Within days, he began eating solid foods that were previously unmanageable. He experimented with varied speech sounds, and clearly uttered a number of words that had been unintelligible before the surgery. Surgeons reviewed his lip and palate a week later and declared him fit to return home. The trip was accompanied by the beautiful sound of Pumlani’s snoring – another newly acquired skill!

Pumlani is now receiving intensive speech-language therapy at Zithulele Hospital to facilitate his development, which had been arrested by his cleft. Judging by the progress already made, he will soon be talking up a storm.

We would like to extend our deep thanks to all of you who contributed resources towards this cause, including Prof Chait, his surgical team, Desiree Allen and Dr David Benn.